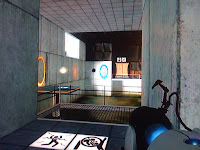 Portal is a first person platformer with a fun addition. Like other platformers, you get to run around trying to get from here to there. But it's the future now, and you've got a hand-held wormhole maker!

Can't jump up to the platform? Pull the trigger to open a wormhole next to you, then shoot to place its other end on the wall next to the platform. Step through and poof, you're there! Of course, the levels aren't suddenly a piece of cake, they get very sneaky.

It's a brainy sort of fun. You have to solve path-finding puzzles using more than just what's visible on the screen and more than just three dimensions. Oddly enough, it's pleasantly twisted when the mental map in your head is a klein bottle.
at 10:01 PM No comments: 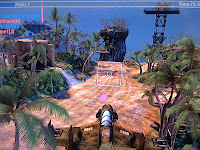 Warhawk is perfect for a quick online frag session -- if it moves, shoot it! Instant action.

Once you get the hang of it, you'll find that it's fun to specialize in certain tactics. I like picking planes out of the sky with a rocket launcher. Some folks are really good with a sniper rifle. The tanks are especially fun. And I like flying, as long as there aren't too many missile launchers around.

Now that it's a Greatest Hit, it's only twenty bucks. I recommend the downloadable version.
at 9:57 PM No comments: 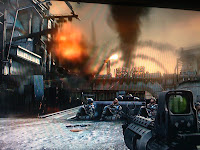 Holy crap this game is intense. The intro movie sets the stage spectacularly, then launches you right into the action. Even in easy mode it's intense -- you survive longer, but it doesn't ratchet down the intensity at all. My eyes are still bleeding.

Visually, it's smooth and detailed. Your bullets don't just leave scars on the column that the bad guy is hiding behind -- you blow off pieces of concrete, all the way down to the rebar. And that piece of corrugated steel *you're* hiding behind gets knocked out of place with every grenade they land near it. You can see rockets coming at you smoothly, not stuttering between frames. The clear graphics give you time to side-step!

Then there's the AI stuff, which is remarkable. Enemies work together, shouting things to each other. They split up to flank you and they sneak around behind you when you hide. And this adaptability means that if you're failing a level, you can try a different approach and get totally different results. Blazing down the middle while mashing buttons not doing it? Sweep around the side, draw enemies out one by one, or just see whatever works in that particular area.

In any currency (six movie tickets, eight hours of iTunes, three blu-rays...) this title was definitely worth full price.
at 10:21 PM No comments: 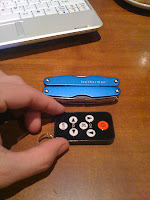 I now carry *two* multi-tools in my bag at all times. The Leatherman has been joined by Think Geek's Micro Spy Remote. You point the teeny little remote at any TV you want to control and hold down the mute button -- as soon as your target TV mutes, you let up on the button. Now the channel, volume, mute, input and power buttons are all tuned to control the TV you've hijacked.

Tired of watching soccer at your favorite pub? Switch it to Rock of Love Mystery Bus.
at 10:20 PM No comments: