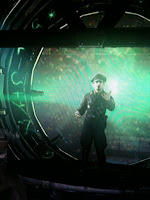 I used to love playing Castle Wolfenstein on the Apple ][.  I liked how you were outnumbered, stealing ammo off the bad guys, and saving the day.  It was missing just one thing ... zombie nazis.  Well, these may not be exactly zombies, but they sure are supernatural nazis.  And they still make "aiiieeee" noises when you gun 'em down!

Once I'd popped the disc into the PS3, it didn't come out until I was done with the single-player campaign.  It's excellent!  There's a goofy story.  There are nazis using gateways to other dimensions.  There are weapon choices and upgrade choices that let you pick your fighting style.  A ton of detail makes it extra compelling.  I really enjoyed it!
at 10:56 PM No comments: 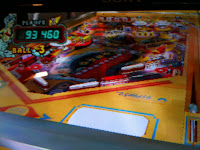 I'm totally enjoying the Pinball Hall of Fame on my PSP Go.  You get to pick from a few of Gottlieb's most popular tables, and naturally you have to beat a challenge on the simple ones, to unlock the others.  But also each table comes with a snippet of the history of the machine.  My favorites so far are the Genie machine and the Black Hole machine ... but I keep trying my hand on the love tester (yep, the thing that tells you how hot a lover you are) just 'cause it's, well, weird to include a machine that you can't "win" on a gaming platform.  Well done!
at 10:38 PM No comments: 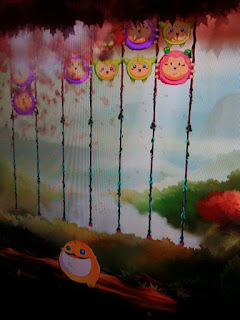 The launch of Critter Crunch was less than impressive -- the trades should've been heralding "The next PopCap" or something like that. This is an action-puzzle game, where the rules are simple, the controls are dead simple, and everything is just cute as hell. Plus, the music is catchy, and the goofy noises things make as you catch 'em with your tongue and spit them into the waiting mouths of predators higher up on the food chain add a cutsey percussion to the whole thing.

Oh, and there's actually a part called the "Puking Tutorial" where they instruct you on regurgitating rainbows. Kris plays several-layers-deep strategically, while I mostly mash buttons, and we both love it! 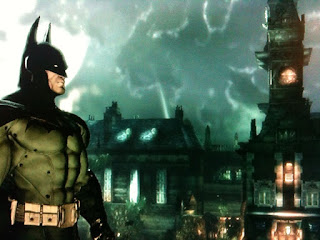 You see!? This is how you do a game based on a cartoon! The player  becomes the protagonist seamlessly, rather than just riding along on the hidden track of a jungle safari ride.  Plus, there's a real writer! Ryyyyyyye-tooooooor.  (Doesn't hurt that it's Paul Dini fer cryin' out loud.)  And who's playing the Joker? Mark Hamill.  Because he always does. It's an episode of Batman the Animated Series, it's just really complex, takes longer than the usual episode, and has a lot of side quests.

The fighting is great -- you're a badass, hand to hand.  But then your XP-based power-ups are things like the skill to drop down from a gargoyle and string up your opponents.  For kicks I did a level entirely by sneaking around the rafters and stringing the bad guys up when no one was looking.

Harley Quin went and turned into a sexy-schoolgirl cliché, but the rest of the characters have all the depth and intriguing-weirdness you expect, plus a little extra something that you can only really convey in an interactive medium where the player is discovering them as part of the story and game.
I haven't gotten all the way through yet, but when I do, I'm watching every last line of the credits.  There are gonna be names I'll recognize in future games.
at 12:07 AM No comments:

What an interesting idea for game controls.  Try Rabbit Wants Cake.
at 5:51 PM No comments:

Evidence of Everything Exploding for Mac/PC

What a totally weird browser game.  I love it!
at 9:48 PM No comments: 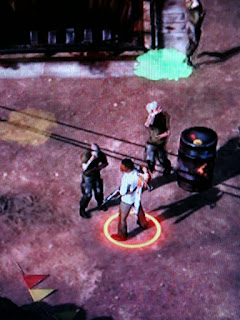 You are the last hope of mankind. Use the left stick to run around, and the right stick to shoot. Every once in a while, there's a human survivor, so run over and protect them until they can escape! Eliminate all the robots zombies to advance to the next level.

You start out with a machine gun and a chain saw -- and while the machine gun might be more effective, the chainsaw offers panache, especially when wielded over your head and plunged into your adversaries' chests! You'll collect exploding, zombie-attracting teddy bears, too -- they're like grenades but whey cuter.

My favorite part is that for a moment after a zombie grabs you, you can shake the controller to throw them off you again. This is a discombobulating mode shift, and oddly fun. It's my new flavorite laundry-time game! Braaaaaaains!