Split/Second is a car racing game, and I'm hit-or-miss on my opinion of those, but I just finished playing this one all the way through. You know those crazy car chases in movies, where they're flying through an abandoned industrial sector, with stuff blowing up all over the place? It's like playing those scenes, yourself. You're racing on and off streets, with "real" cars -- but you accumulate powerups that let you trigger explosions in front of the competition, which plays like a kart racing game. The AIs match your skill well (if you pick slow cars, they pick slow cars) and the courses are varied enough to be interesting, but repeated enough to be familiar by the end of the game. And there's nothing like triggering an explosion moments before the finish line, to knock the opposition out and jump to first place just in time. Zoom!
at 4:45 PM No comments: 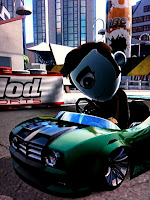 In the words of days-gone-by search engines, "More like this!"  Sure, I'm a sucker for user-generated content, so I was looking forward to ModNation ever since last year's E3 demo, but it's lived up to my hopes.  It's great!
It's a fun kart racer, with balanced power-ups and smooth controls, and a few tricks that sometimes mean the race leader loses, right at the last second.  Everything you expect from a kart racer game.

But the track-creation tool is the really awesome part.  (Well, that and the car creation tool, or the character creation tool, actually.)  Like any good level generator, your first few are awesome because you don't care, then the next few are all messed up because you have something in mind, and then the rest after that work because you find a groove and the tools don't get in the way.  Then you go multiplayer and play your maps with other folks.  And then folks tell you what works and doesn't work about them.  And then you make more!  You gotta try this.
at 11:37 PM No comments: 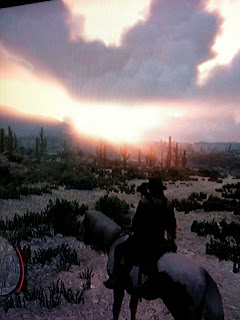 OMFG this game goes forever.  Red Dead Redemption is a third-person shooter where you're the gristled cowboy with a dark past who's fighting to go straight.  The main story is hours and hours, the scenery reaches for miles, side quests with real stories are littered everywhere, you can collect pieces of outifts, or tame horses, or shoot horse thieves, or save damsels, or get robbed by damsels.  It's a jillion things to do, and you could easily spend a month finding all the hidden bits.

Also, pardon the "gee wiz," but whoever did the lighting for it deserves a medal -- sunrise and lightning storms were my favorite.  They really nailed the Western genre.  The music is similarly on target, though after a few hours I turned it down so I could run Pandora on a laptop.  It's a remarkably pretty game, making it good for spectators, too.  Yeehaw!
at 9:13 PM No comments: 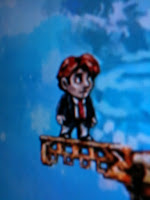 Braid poses a time-traveler's dilemma, what if you could go back and undo all your mistakes?  In this side-scrolling world, you can.  Biffed the timing on jumping those koopas?  Back up in time and get it right the next time.  Oh, but it's not that easy -- some things aren't affected by your time travel.  It makes for mind-warpingly interesting puzzles that involve overlapping, but not concurrent, time lines going in different directions.  Weird and wonderful!
at 6:18 PM No comments:

I'm a sucker for playable art. You don't "play" Kometen so much as you kinda hang out with it, listen to groovy music, swing around the stars and generally just kinda "chill" with it.  Easy control, sweet music, seamless physics, lovely graphics and a whimsical story.  Holy crap, how did thirty minutes go by!?
at 11:21 PM No comments:

God of War III for PS3 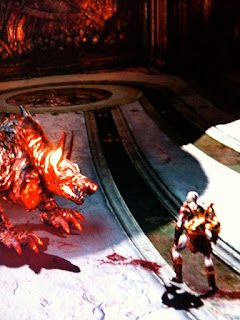 When me droogs and I are up for a bit of the ultraviolent, this game hits the spot.  There's slashing and smashing and decapitating to fill an evening with action.  (I think the producers secretly own shares in a fake blood factory, because there are gallons of it here.)

There's this story, too, about killing all the old gods of Olympus, and you get to ride on a Titan, which is pretty freakin' awesome, but mostly you kill things that gush blood everywhere.  Also, there are spots where you have to pull levers in the right order to get a platform to lift you to the next area ... where you kill things.

There are boobs.  Did I mention that?  Some of the things you kill have breasts on them.  Gorgons, I think.  So, *evil* breasted-things.  But boobs you can look at.  So there's that.

The whole thing's actually quite pretty.  I give it two thumbs up ... which I will then chop off and throw into the fires of Hades.  Haiyah!
at 8:55 PM No comments:

I didn't think I was into the pewpew games but I can't stop playing this one. I'm not even all that good ... my aim is strafingly bad. It turns out I love this one.  I keep playing. 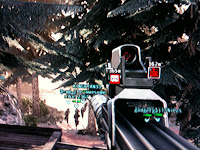 I think the key is the tech trees. You get XPs for shooting the other guys (and TWICE as many for healing teammates) and every few dings you can afford to buy another skill.

There are several ways to go with skills. I started out favoring machine guns, and worked up to the biggest baddest one. That worked okay. But then I respec'd for assault rifles and teched-up to get the 4x optical scope, which I now totally prefer. Respecs are available every dozen or so levels, so you can try a new stuff as soon as you're bored with your last choice.

I always first get the healing and resuscitation skills -- that's how I level up. Whether spraying machine gun fire, or controlling bursts of rifle fire, my strength is in the heals.

Now my friends need to pick up a copy. A clan on headsets is a formidable force.
at 10:11 PM No comments: