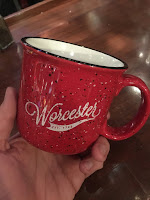 Hilton Garden Inn -- You weren't impressed.  Maybe there's some place better, maybe not.  It's apparently in the heart of "downtown" but you wouldn't know from walking around.  Also, what the heck is up with the parking lot across the street smelling like rancid grease all the time?

The White Eagle -- With a linoleum counter and keno on the big screen, this place belongs next to a trailer park, in a good way.  But it's not, so skip it next time.  (If a trailer park sprouts up, right next to it, the clientele will lend the perfect vibe, and you should try it again.)

Banner Bar & Grille -- Meh.  Kind of a typical sports bar.  I mean, it was kind of interesting that while you were there a bunch of Santas (apparently some running club) showed up and sang a song and then took off.  But how often does that happen?

Dive Bar -- Yes it's actually called that, and to their credit, they were the only bar you visited that didn't have their overhead lights turned all the way up.  The selection of beers was alright, though all the IPAs you had were those cloudy unfiltered types that you don't exactly love.  But then again, they were playing Star Wars on a big TV over the bar.  That's worth something, right?

Pizzeria Uno -- Might as well mention it, since it's conveniently attached to the Hilton Garden Inn where you were staying.  This is, sadly, the safest bet.  Everything here is just short of mediocre, but at least it's predictable, and in the winter it was the only place that had their heat turned up to a sensible level.
at 7:03 PM No comments: 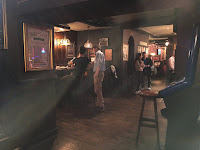 Not bad at all.  Naturally, this being Paddington, it's a well-lit establishment.  But it's okay.  They have a good selection of beers, and you like the Punk IPA.  Make sure to go into the back part of the place.  At first glance it looks like a small pub, but there's more through the doorway.  On cold nights, it's almost essential that you get away from the front doors, even if they've got the space heater right there, on full blast.
at 12:28 PM 1 comment:

You like this place.  It's in a tiny alley, and the bar is small, but what happens is half the customers are inside, and half the customers are outside in the alley smoking and drinking.  It's kind of like Small Bar used to be, when smokers could loiter in the side walkway, or out front at the tables.  Of course now you can't do that at Small Bar.  Thanks a lot, preachy California busybodies.  I mean, I don't even smoke anymore, but I do appreciate an establishment where smokers are welcome as long as they aren't bothering other patrons.  This bar is one of those places.  Also, the bartenders are nice and snarky, so there's that going for it.
at 12:18 PM No comments:

Wow, there are a dozen pubs called Victoria in this town.  Long live the queen.  This one's a pretty chill pub, full of locals, and Wednesday is pub quiz.  (It's impossible, if you're not up on English current events.)
at 12:03 PM No comments:

Not bad, but not my first choice.  Sure, all the pubs in this area are well-lit and pretty clean -- there are no dive bars -- but this one has carpet.  Nonetheless, a great place to have Guinness and write postcards.
at 11:59 AM No comments: 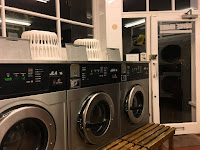 This works.  Clean, well lit, and attended full-time.  Note: no need to go with the "fast wash" as the normal one only takes twenty-five minutes.  It's not like elsewhere in Europe where they have the Miele machines that take forever.
at 10:06 AM No comments:

Skip it.  For some reason, right after swiping your card, they notified you that they require a copy of your ID as well.  So ... identity theft, anyone? Pick a nearby chain instead.  Also, the fancied-up grass-bar has no taps.
at 9:59 AM No comments:

You liked this place, especially because it has lots of craft beers -- a rarity in New York where choices are usually centered around Budweiser and Brooklyn Lager.  It was a bit crowded, but two seats opened up pretty quickly.
at 9:52 AM No comments:

A fantastic dive.  The bartender was attentive and sassy -- skipping songs on the internet-connected jukebox, unceremoniously.  They have Fernet, and they know how to use it, so have Lyft queued up with your hotel destination, just in case.
at 9:45 AM No comments: 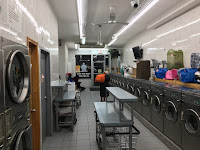 With a name like that, this place should rock!  It was okay.  Plenty of machines, clean, and open late.  The attendant guy was angry, but if you imagine it's a parody, you can quietly laugh to yourself.
at 9:38 AM No comments: 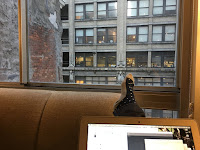 This one was alright, but try the Hyatt Herald Square, first.
at 9:34 AM No comments: