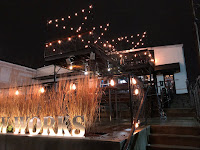 Live music all the time, and they have great beer.  They have a double-IPA that reminds you of how Alesmith X had tons of hops without tasting like a pine tree.  Go back some time when you're not driving.
at 3:23 AM No comments: 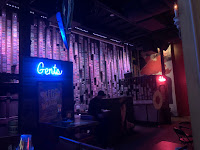 Full of pinball and eighties video games on free play mode -- and pictured is a wall of audio cassettes -- this was kind of fun to check out.  Remember though, you lucked out, finding street parking when all the lots wanted a thirty dollar flat rate.  Also make sure to go early, as it seems to turn into a retro nightspot for hipsters later in the evening.  Great for a happy hour beer, though!
at 3:17 AM No comments: 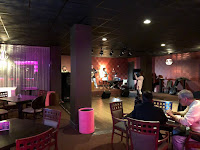 They ask, "where are you staying?"  You say, "that place right by the airport ... the uh, 'Hotel Preston?'"  They consult each other, "isn't that the place where those hookers died?"

It's not that bad now, but you can imagine that it was, in fact, "the place where those hookers died" in recent history.  It's the sort of place that used to be totally run-down, but then they threw on a fresh coat of paint, rubbed some Boutique on it, and started advertising to hip kids on a budget.

Sure you could stay elsewhere.  But there's a sort of charm to the climate control equipment coming from a Motel 6 in the seventies.  And instead of a bible in the nightstand, there's a card that offers a "spiritual menu" of a dozen faith-based texts you can request from the front desk.  (Though none is an eighth grade science textbook.)  And it's kind of sweet how the "lounge" has its "unsigned acts show" on Tuesday nights.
at 2:47 AM No comments: