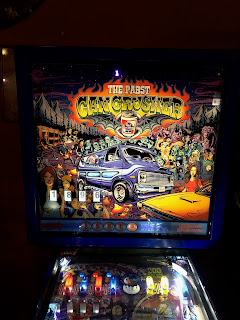 Well, you found the hipsters.  Hooray, you!  But you also found some fun pinball machines.  I think they rotate the beers around -- the drafts all suck -- but you can probably find a bottled beer that is okay.  Or, I guess you could give up and drink PBR.  The brand is enshrined in knick-knacks and metal signs and neon and ... well, you know this place.  It's that place.

Good for an hour or two of playing the crazy Pabst Can Crusher pinball machine.  (Which, incidentally, dates back to only 2016.  Brilliant fake retro.  In fact, don't follow that link.)

If you bring a friend, it could be a whole evening.  Lyft it.  The tasty beers are high ABV.
at 7:10 PM No comments:

Hell yes!  They bill themselves first as a pinball arcade, and only second mention that they have pizza.  The machines are totally and dearly loved, too.  There's a spiral notebook in which you can leave comments like "release of the ball from the spaceship lock GDTM, may need rebalancing."  I think GDTM is "Goes Down the Middle"  And then they fix it, and log that too.

Any time you're stuck in Bethesda, this is a great place to get some pepperoni and play some flipper.
at 6:50 PM No comments:

Okay, well, what choice do you have?  I mean, basically I could just stop right there and tag this one as "under forty."  No, really.  Might as well.  The stuff near your work site isn't near any kind of restaurants or pubs or cultuire.  The other hotels in the region of real stuff, well, suck worse.

Okay, the plus side!  There's stuff like the Vük pinball arcade, and the Harp and Fiddle that are great.  So.  If you get stuck here, look those two places up.

Okay, now let's be pragmatic.  The Hyatt's ninth floor has been renovated, I know that one, so request a floor there.  Also, there are two "up" buttons for the elevator and you need to hit both -- one of them is the two elevators on the right (one of which is out of order) and the other one is the newer elevator on the left that works and is speedy.  So hit them both and hope you get the one on the left.  The coffee at the Daily Grill is awful -- but sometimes they're out, and you kind of dodge a bullet, in a really screwed up way.  Especially screwed up because if they're out, people will tell you "hey Dunkin Donuts is right downstairs."  It is, actually.  Wow.  Push the button.