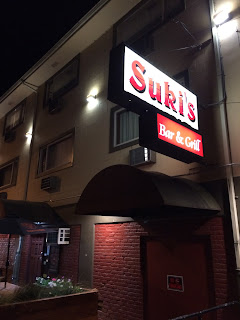 This would have been a review of the Travelodge Portland City Center, but well, you know how that goes.  They'll put an extra coat of paint on the place, but not patch the holes in the walls, so you get that weird "painted crater" look.  Instead of using spackle while repairing around the towel rack, they used silicone, because, you know, that'll hold up under any sort of weight.  They don't leave chocolates on the bed -- they leave cigarette burns.

But I was going to talk about Suki's Bar & Grill, which is downstairs.  You're used to calling something the "hotel bar," but here you need to flip it around and just call the upstairs establishment the "bar motel."

So here we are, nestled between freeway ramps, and really not in a real destination.  Yet, somehow this bar has plenty of patrons. The awning even warns you off ... "Comedy Karaoke."  Nope, still got customers.  And a fascinating bunch each night.

Monday night football, and the place is full of enthusiastic (but polite -- this is Portland) fans from both sides.  How do you fill a Portland bar with an equal number of Minnesota Vikings and Santa Clara 49ers fans?  This town doesn't even have a football team.  Maybe that's what makes it possible.  I don't know.

Tuesday night was pub-quiz night.  Clever, too.  Do you know what type of doctor Dr Huxtable was, on the Cosby Show?  In light of recent news, it makes a kind of gross sense.  Also, no one cheated (honest folks -- this is Portland) sneaking a google on their phone.

Wednesday through Saturday are Karaoke.  So far it's hard to tell where the mixed bag of participants come from.  Wednesday was all the standards like Journey, Sonny & Cher, Toto.  Thursday somehow ended up being half girls'-night-out screaming versus guys doing really awful country songs.  The performances are all enthusiastic (but safe -- this is Portland) and remarkably in tune.

Okay for a bit, but not the best spot for "working from park" for more than an hour or so.  It's sort of interesting if you'd like some distraction.  The bike messengers seem to come here to take breaks.  And there's also a mix of professionals, or yuppies, or something.  And one or two folks with a hustle about selling stolen/pirated items.  So, a nice mix of people to watch.

But none of the benches have backs.  And it's noisy with all sorts of machinery.  And it's pretty much in shade all the time ... which was great during that super-warm week the other day, but probably makes it two-sweater weather on normal days.

It does, however, have parrots.  And there is also a heart sculpture.
at 9:39 PM No comments: 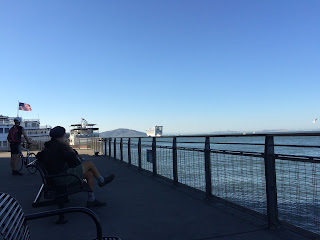 This is a great spot for the "working from park" days.  And there's motorcycle parking right at the base of the pier.

There are benches with backs, which makes it easy to lounge a bit while you type away on your laptop.

There is a Starbucks right at the head of the pier, but you're also right next to the Ferry Building, so you can pop in there to the Peet's and grab a "Black Tie," if you're into the whole cold brewed thing.  (Be advised, the barista was some scuzzy guy with dreads and a home-made apron, the last time I was there.)

No matter the microclimate on the particular day, the bench arrangement is great.  The ones at the very end of the pier end up in shade after about 2 PM.  The ones up the sides of the pier seem to be in sun just about up until it goes down in the west.